Last Weekend I had the opportunity to head out to Williamsburg, Massachusetts to visit Jeff Hatch who is the owner and lead instructor at Raven Wilderness School. As a bonus I also met a gentleman by the name of Frank Grindrod who runs Earthwork Programs and helps Jeff out at the school. Two of their students ( T.J. and Jim) were also there and we all quickly became friends. I had met Mr. Hatch at Roots School in Corinth, Vermont last fall during the Roots Rendezvous. Since then we have kept in touch through Instagram. I had been wanting to check out his operation and especially the primitive camp he had setup. I waited for the perfect weather... 5 Degrees Fahrenheit, Wind and Snow.

As I drove from the Capital Region of NY into the Berkshires of Mass. the weather changed dramatically. The higher elevation produced colder air and the snow started falling. By the time I reached the camp a couple inches of fresh snow blanketed the roads and woods. Jeff greeted me at the entrance to the dirt road that lead back to the camp in his Jeep Cherokee. The beast had a 6" Suspension Lift, 33" Mud Terrain Tires and an Old Town Canoe Strapped to the roof. Luckily I drive a 4X4 Tacoma, although not as pimped out as Jeff's Jeep, I was still able to follow him down the snowy road into the pines towards the camp. I was in Heaven!


Once at the parking area we had to cross the west branch of the White River on foot by way of an old covered foot bridge. It was big and sturdy enough to where you could cross the bridge with an ATV if you so chose. A quick walk through the tall pines revealed the camp. The ambiance was amazing. From the distance you could see the warm glow of the camp fire through the falling snow. Upon entering the camp there was eggs cooked with tomatoes, potatoes with bacon and of course baked beans on the side that had just finished cooking on the fire. Perfect timing, It was about 4pm and my stomach was devouring itself because I had not yet eaten that day.

After wolfing down our delicious grub we quickly got to work collecting firewood for the long cold night ahead. They already had a good stockpile going we just need a few extra big ass logs (that is a technical bushcraft term) to keep the long fire going through the night. TJ and Jeff did the hacking with Axe and Saw while I carried the cuts back to camp. Yay for Teamwork! Once we had a sufficient pile of dry and ready to burn wood we headed back to the camp. 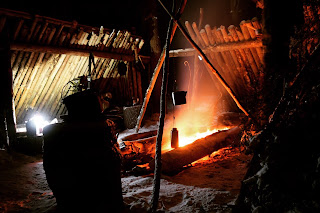 Jeff had forewarned me that he had obligatory date night plans with his wife and wouldn't be able to stay long after dark. Happy wife, happy life, right? He said goodbye with confidence that we had it under control and he dissapeared into the darkness. At this point it was T.J., Jim and I. I didn't meet Frank until the next day. We finished setting up our sleeping quarters in the leantos of the camp. After we were squared away we settled around the fire. Just like for eons before us the stories started to flow as the warmth and glow of the fire consumed us. We talked for hours and had really awesome conversations. T.J and Jim were good company. 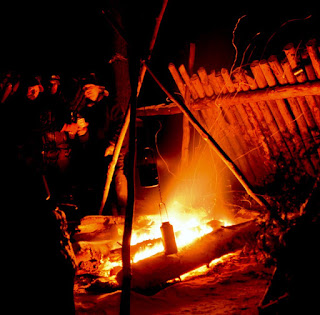 Right before bed time I cooked up some Ramen Noodles in my Pathfinder Stainless Steel Cooking Pot on the Pathfinder Alcohol Stove. When it is cold outside it is always good to eat a small meal right before you go to sleep. It helps to keep you warm while your body is working to digest the food throughout the night. My sleeping setup included the Grabber All Weather Blanket set up as a heat reflector on the back side of the Leanto, a Reflectix Mat for further heat reflection and cushioning, ALPS Mountaineering 0 Degree Sleeping Bag, a mylar sleeping bag liner and a Wool Blanket as a fire retardant to keep any rogue embers from burning a hole in my sleeping bag. I slept snug as a bug in a rug.

Around 4am I heard T.J. rustling around so I peaked my head out and saw the fire had all but burned out. Both T.J. and I got out of our sleeping setups. T.J gathered more kindling as I split wood into smaller pieces by batoning with my Mora Garberg . Once we had enough kindling it was easy to get the fire going again. T.J. blew on the embers a couple times and we had flame. We built the fire back up, threw a couple more big ass logs on and climbed back into our beds. Several hours later I woke to the sound of Jeff's voice as he returned back to camp. He was smiling so I am assumed he had a good night with the wife as we slept out in the frozen wilderness.

We built a small fire back up, boiled some water for coffee and washing up and chatted for a bit. They invited me to go to a Tracking Class that Frank Grindrod was holding at a local conservation area. I gladly accepted so we broke camp and headed out. On the way to the conservation area we stopped at a local eatery and grabbed some awesome breakfast. We arrived at the spot and I was introduced to Frank who was there with around 15 people that were there to also take the class. As Frank gave the welcoming speech I knew it was going to be a good class. Frank was a very good speaker and I could tell right away he knew his stuff. The first stop along the way was at a beaver lodge where we discussed the life of the beaver in winter and how the conservation group had worked so hard to get beavers to thrive and survive in the pond on site. Frank shared a funny story about a close encounter with a beaver he had and then we moved on deeper into the woods. The next couple hours we spent tracking a red fox, whitetail deer and porcupines. All the while discussing how to differentiate the tracks and decipher what the animals were doing as they left the track. It was very informative and Frank was on point.

As the class was wrapping up Jeff and I invited Frank to meet us back at the camp. I was going to video record an interview with Jeff and thought it would be fun to have Frank join us. Jeff and I left and stopped at the same eatery as earlier, this time for a couple slices of Pizza. It wasn't NY pizza but it was still good.

Jeff and I arrived back at camp, gathered more kindling and made our way back to the fire ring. After we broke up and sorted the kindling, Jeff pulled some Tinder he had collected from around the area out of his Frost River haversack. He then whipped out his knife and Ferro rod, like the pro that he is with a couple sparks we had a fire going again. Just as we got the fire going Frank appeared through the pines and joined us. As the light was fading I set up the camera and we settled by the fire. We filmed a great sequence talking about what Frank does and then moved to some other really great conversation. At the end of the sequence that is when the Camera died...Cold and electronics do not mix so well. My intentions were to interview Jeff and talk more about his school. Nonetheless it was some great content. Stay tuned for the Youtube video that will be coming this weekend. It was getting late and I had to head out on the couple hour journey home. Jeff and I agreed that we would meet up again to finish the interview. Whether I go back out there or I take him on an adventure in my home turf the Adirondack Mountains we will get it done, soon.

All in all it was an excellent trip and adventure. Meeting Frank, T.J. and Jim was a true honor and I now consider them friends and an extension of my bushcraft and survival family. I hope they feel the same. Jeff and I will get to finish the interview and perhaps do a little more skill orientated video in the very near future. Huge thank you to Jeff Hatch from Raven Wilderness School for the hospitality. Make sure you check out his school and website linked above. I assure you it is well worth the trip.

Like mentioned I will be posting a YouTube video of the adventure very soon! I will include some great footage and pics that I didn't post here. Please subscribe to my Youtube Channel so you can be alerted when the video is posted! Thank you!